Where to live in Eindhoven 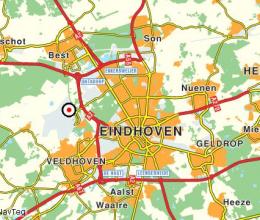 Philips and Eindhoven go hand-in-hand. But the city and surrounds also have a lot more to offer - as many expats have already discovered.

Until the arrival of Dr Philips in 1890, Eindhoven was not much more than a collection of villages. Because of 19th century urban planning decisions, there are no longer canals and pre-1940 architecture was destroyed by war-time bombing. But over the years, things have changed immensely and for the better. Thanks to hi-tech multinational employers, there’s a large community of expats. Eindhoven railway station is close to the centre and the airport is about three kilometres away.

Eindoven's coat of arms
Although, In 1997, Philips decided to move the headquarters from Eindhoven to Amsterdam, a move which they completed in 2001, Philips Lighting, Philips Research, Philips Semiconductors (spun off as NXP in September 2006) and Philips Design, are still based in Eindhoven.

Most expats live in the villages that surround this industrial city, although the centre of Eindhoven is popular with those looking for apartments.
Eindhoven railway station is close to the centre of the city, and its airport is about 3km away.

Central Eindhoven
Accommodation is mainly in new and rather pricey apartments— plus hotel-apartments for short stays — popular with single expats and couples without children. People living in the centre have plenty of facilities, including a shopping mall and scores of international restaurants.The central district includes the international schools--attended by children from Den Bosch and Tilburg--and PSV football stadium.

North (Woensel)
North of the centre is divided by wide, treelined boulevards. Housing is mostly newbuild with apartments and terraced houses for all budgets. Woensel south is cheaper and the market is great for ethnic shopping.

Situated around the Karpendonkse Lake and Eckart Forest, the area has a range of housing including some exclusive detached properties.

South
The Philips High-Tech Campus is situated at Gestel along with the International Primary School, the Open-air Museum and the Tongelreep International Swimming Complex. The villages surrounding Eindhoven’s centre are popular with expats. International schools are still within cycling distance and the sense of community is greater.

The village is popular with expat families, and children are able to cycle to the international schools in Eindhoven. A car-pooling system for the school run is also in operation.

This compact village has restaurants and a shopping centre, plus a nearby golf course. There is a good road connection with Eindhoven and further afield.

Veldhoven is virtually a south-west suburb (the other side of the A2 from Eindhoven). Bigger than Nuenen, Veldhoven is stocked with houses mostly built in the past 20-30 years. These detached properties are slightly smaller than those in Nuenen.

Well situated for the international schools, Veldhoven has a large, new shopping centre and plenty of restaurants. The Philips campus is right here.

There are some gorgeous — but more expensive — villas to be had in parts of Waalre, in the forest that surrounds the area. These larger houses sometimes have swimming pools and two bathrooms, and sit in up to 3,000 sq metres of land.Popular with top executives and their families, this old village has plenty of shops and restaurants. It's also next door to the Philips campus.

Son has excellent transport facilities thanks to the A50 towards Nijmegen — indeed, there are several villages close to the highway that are popular with expats. The village itself has detached houses popular with families. It is 3km from the city centre.